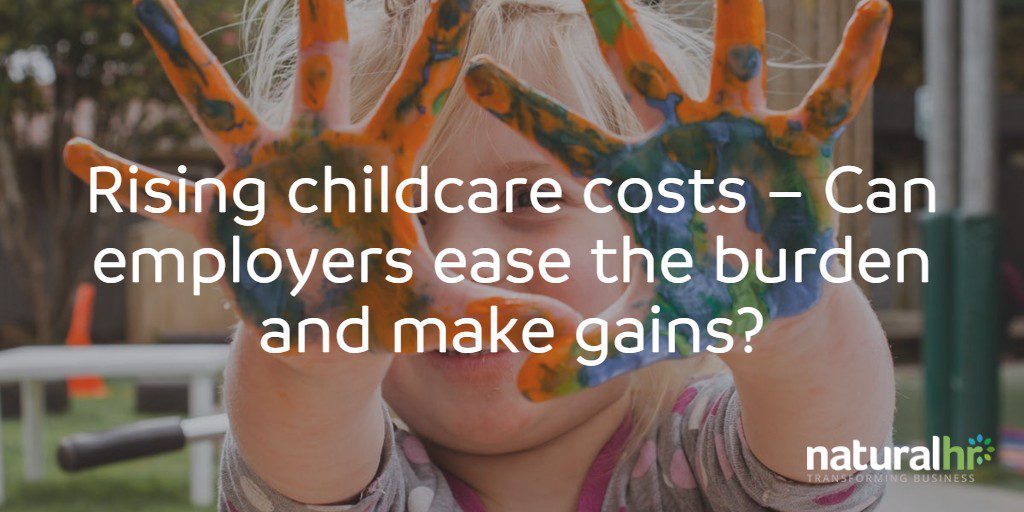 The Family and Childcare Trust (2015) has published research which shows that childcare costs for under-fives have risen by 27% over the past 5 years. As a working Mum, I know first-hand of the rising cost of childcare, each September I am provided with a letter from my son’s nursery containing a fee revision.

Fortunately, I have been able to take advantage of tax savings through a salary sacrifice scheme to provide me with childcare vouchers which cover part of my monthly childcare bill. The amount anyone can claim and save through childcare vouchers depends on the rate of tax they pay. The scheme is more favourable towards basic rate taxpayers as up to £243 of childcare vouchers can be claimed per month, providing an annual tax saving of up £933. These vouchers operate per employee, meaning both parents can claim them, providing their employer offers the scheme.

Childcare vouchers are often listed as an employee benefit on company career pages but don’t think it is just large employers that can offer this scheme. In fact, the scheme is generally available to all employers regardless of how many employees they have. Employers can set up and administer the scheme themselves but it can be time-consuming and complex to follow the rules, especially with national minimum wage and maternity leave coming into play. Alternatively, employers can go with a voucher provider specialising in the SME market who, in return for an administration fee, will operate the scheme on their behalf. Additionally, the provider can explain any business risks and help to market the scheme internally to employees.

The government has announced changes to the childcare vouchers scheme which are due to come into force in 2015, known as tax-free childcare (TFC). The new changes will mean that parents can obtain childcare support up to a maximum of £2,000 per annum per child. For every 80p parents put in the government will put in 20p, making the total amount available £10,000 per child. Unlike the existing salary sacrifice scheme the TFC Scheme will not involve employers and the money will be kept in an online account with the National Savings & Investments Bank– then paid to Ofsted regulated childcare providers. Until the TFC comes into force, employers can still offer the current salary sacrifice scheme which they can continue to operate for employees who have joined before TFC is launched. Once launched, employees have the choice to stick with their existing salary sacrifice or go with the new TFC depending on which is better for them financially.

TFC plans have already received criticism as they are not expected to be available for households with only one working parent. Additionally, if a couple only has one child they may potentially be worse off depending on how much they are paying for childcare. Payment can only be made to Ofsted approved childcare providers and not to family and friends etc and parents will have to reapply every three months. Also, TFC is not available if parents claim other benefits such as universal credits.

Employers operating the salary sacrifice scheme are effectively enabling those with young children to enter or stay in the workforce when it might not otherwise be financially viable – giving the business a wider talent pool or minimising disruption by keeping existing employees in the workplace.

Heather Start, Director of Gemelli Employee Benefits further explains the benefits SME’s can gain from offering the salary sacrifice scheme. Heather said “For Employers – It is not too late for employers to help their working parents and also save up to £400 on Employers National Insurance Contributions per year per employee. It’s a great way to support your employees and show you care. The savings Employers make in NIC could be used to enhance the benefits package offered to all employees making them an employer of choice.

For Parents – if you have any children up to the age of 15 and currently use or might be using any type of childcare in the future – ACT NOW and join the current Childcare Voucher Scheme to start saving money now! – up to £1800 per family per year. Childcare Vouchers can be used for a variety of childcare including- Childminders, Nannies, Pre-School Groups, Day Nurseries, Prep School, Before and After School Clubs, Holiday Clubs, Tutoring and even Boarding.

For Small Business Owners/Directors – if you have an Ltd company you can also make significant savings on childcare for yourselves and any employees you may have. The Gemelli Scheme does not require any minimum numbers. Business owners can operate a childcare voucher scheme on a Salary Sacrifice Basis or as an Additional Benefit.

Our key messages are – Why wait when you can save money now with the current scheme and employees can keep their options open until they know which scheme is right for them.
If any employees are unsure, they can always join the current Childcare Voucher Scheme by taking as little as £10 per month.
Request our Free Guide on the Changes to Tax-Free Childcare and keep up to date with the changes as further information is released.”

UPDATE: Tax-Free Childcare due this autumn delayed until 2017

What company perks do employees look for in 2022?

Employee benefits in the age of remote working

Looking towards the future: Your guide to retaining your top talent in 2022