Virtual team-building ideas – 30 people share what they are doing 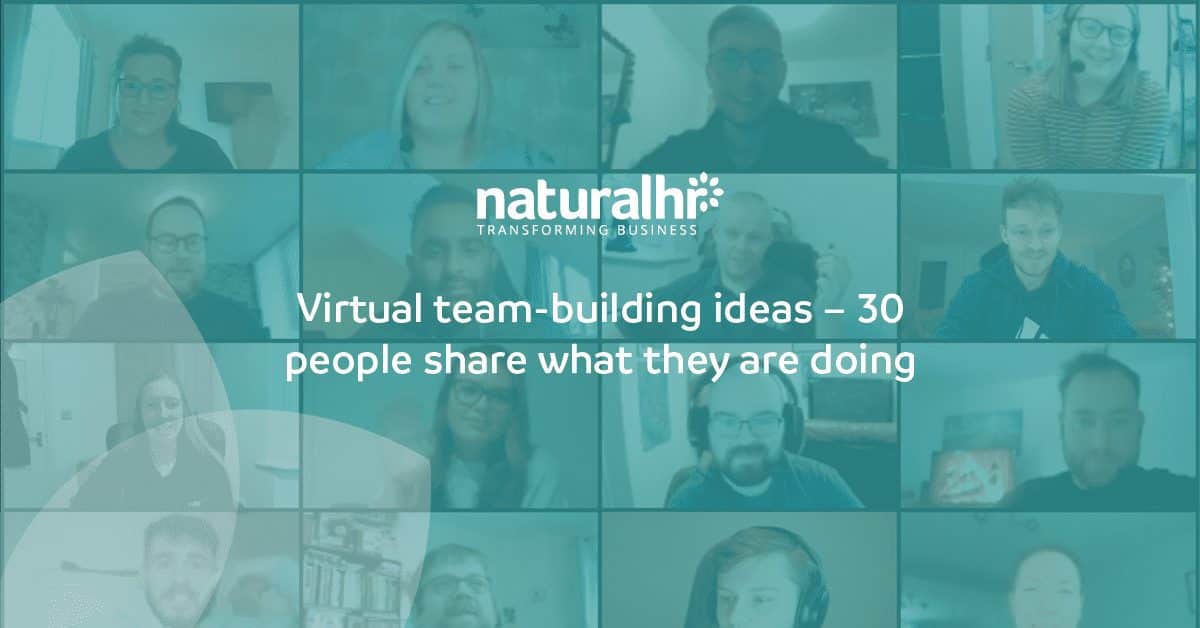 As we approach the year mark since remote working took charge, by now, we’ve all got our own set working routine, with some of us looking like Quasimodo, hunched over the dining table.

At the same time, our calendars continue to be flooded with yet more Zoom calls, which begs the question, how tedious can remote working be?

This is why Natural HR decided to ask LinkedIn users what they are currently doing to engage remote workers through virtual team-building. Whether that is Zoom quizzes, a set time for a tea and a chat, or setting up a company multiplayer game on Call of Duty; the Internet has spoken.

A big thank you to everyone who shared their ideas, and the following are the 30 best virtual teambuilding ideas that were suggested.

“We are running daily team check-ins on Google hangouts, virtual escape room team-building exercises, team awards and virtual networking. The fun aspects really lifted spirits and had a sense of commandant, whereas the networking gave everyone the opportunity to spend 30 mins meeting people at random.”

“We have a social meeting each week where we have a game, quiz or something similar prepared. The purpose is to have a good time together and also share concerns and challenges during the time everyone is working from home. We’ve also introduced short coffee meetings where we have a chat over a cup of coffee together. Occasionally, on a Friday, we dedicate time for a virtual beer together to just share what we’ve been up to during the week.”

“We would love to do more, and we’re currently considering other activities like virtual walks.”

“My advice is to involve the team. Rotate hosting and planning of weekly or monthly team meetings or add an icebreaker to your regular tactical meetings so that a different person hosts each time. Make it clear to everyone that engagement is a goal for the team and be consistent about hosting team-building meetings. I’ve created team quizzes to help get to everyone to better know one another, as well as designing PowerPoint presentations to lead discussions around team commonalities.”

“The simplest method we use is to just post a random question to the internal group such as, what’s your favourite show to binge on Netflix? This usually gets the conversation going.”

“Time in the diary for a cuppa and non-work chat has worked well, feels more personal and less forced than a quiz etc. 😊”

“Using emojis in informal emails between team members can help soften a message and relay tone, but be careful whom you send emojis, and only use in informal communication with people you know will not mind.”

Amanda, a Head of HR, said:

“We ran breakout sessions in Zoom. This meant that Zoom automatically selects who was in which room, populated with about four people and gave them a positive question to discuss to help break the ice. For example, name one positive thing you’ve experienced during the pandemic? We’ve had great feedback with people talking to others who they haven’t seen since we left the office in March.”

“We’re introducing a virtual murder mystery evening and quiz nights because we are missing our very sociable events that we usually run. We’ve also introduced ‘Brew and Natter’ sessions each week where the teams have 45 mins to just chat about everything and anything they want. We have also sent out little gifts from the business to say thanks and let them know we still care.”

“Make everyone add a filter to turn them into a cat 😺. It made me laugh on the news this morning! Judge… I’m not a cat 🤣”

Thomas, a Head of People and Engagement, said:

“Through the keyhole Zoom meeting. A fantastic way to have some fun with the team but also learn about their different or similar environments. It’s allowed the team to connect on a more personal level and learn about each other and even find out about previously unknown shared interests.”

“We’ve set up afternoon tea over Microsoft Teams and we send everyone a hamper to arrive the day before. Any excuse for a social catch-up is good really, it’s so important to keep relationships going.”

“We have introduced water cooler Wednesdays – a 90-minute fortnightly Teams call that people can drop in and out of just to catch up with other colleagues they normally would have seen in the office kitchen. Mixing that up with virtual horse racing, scavenger hunts and quizzes. We’re also looking to organise virtual bingo too. All held on Fridays as a great way to end the week!”

“I joined a new team fairly recently. From day one, I appreciated a quick ’round the houses’ catch-up on Microsoft Teams every morning. It’s a chance to make sure each other is well and run through key tasks and activities for the day ahead. We then all know what’s going on across the team. I know this idea of a daily huddle or scrum isn’t particularly ground-breaking, but I think it’s great. We also had a fun Christmas party via Teams, but it’s the ‘everyday’ routine that’s so valuable.”

“We held a virtual Macmillan Coffee Morning. Everyone baked cakes and prizes were awarded (personalised Star Baker apron for the best effort). Lots of money was raised for a good cause too.”

“As well as the usual quizzes, bingo etc., I’ve started to build in wellbeing activities during team meetings. Adding additional time to one-to-ones just to chat, creating a chat channel on Microsoft Teams and also looking to move to remote walking in future one-to-ones.”

“We had a game of Bingo over Microsoft Teams; it was great fun and really gave everyone a well-needed morale boost!”

“One simple idea I’m involved in is giving team members a program that empowers them to win. Having great interaction and fun in the classes is really appreciated by the participants who get an opportunity to connect, go into breakout rooms to collectively come up with solutions etc.”

“This is such an important conversation to start and one well-worth sharing.”

“In running virtual seminars for organisations I participate in, I found it was extremely useful to start sessions with ‘icebreakers’ of leaving ‘waterfall’ comments. Essentially posting a question based around the topic, allowing a few minutes to think on it, then counting down and having everyone post their answer at the same time. It creates a lot more comfort in sharing with the large group for every individual, and from that point, allows for identification of some answers and conversations with the members who shared.”

Jennifer, a Program Manager for Graduate and Executive Programs said:

“I’ve participated in a few calls with great companies lately, all who integrate Slack into their workplace for engagement. There are some tools within the platform to pair employees for random coffee dates and discussion boards such as Donut. If that’s not possible I’ve also heard of success with standing Zoom times for employees to connect with each other and escape rooms via Zoom!”

“We run quick prizes for silly quizzes midweek, best gourmet beans on toast photo, fastest typer, most steps completed, a show and tell of an object on your workroom.”

“Started with non-work chats twice a week, then used the time to play Drawasarus or Radio 2’s, Pop Master.”

“Last year, we ran a team session where we were broken into teams and had to demonstrate the theme of ‘adaptable’. We had to show in our small teams what we did to adapt to working from home. Then we came back to the bigger room (virtually) to share our ideas. It was fun with some humorous demonstrations.”

“I would ask your colleagues for their ideas directly. The most suggested 3/5 ideas can be voted to make the event. This would be appreciated as shows you value their opinions. If I were to add an idea, I would suggest a virtual cocktail-making experience. Good luck!!”

“My suggestion is a 1:1 walk and talk. Grab your mobile phones and have a phone meeting while walking around your own neighbourhoods.”

“Virtual coffee break. Set up a meeting between two people who may not have the opportunity to engage with each other due to working remotely, location, time zone, etc. I recently participated in a virtual coffee break with a colleague in St. Louis and in a department I do not support (I’m based in California). It was great to get to know someone outside of HR.“

“Also, virtual happy hour. Our team was provided with a link to order a cocktail or non-alcoholic beverage that was delivered to our home prior to the scheduled Happy Hour. With happy hours, it is fun to come up with a topic such as “favourite concert”. Moving the conversation away from work is important. It allows everyone to participate, and you get to know a little bit about your colleagues. Enjoy!”

“Call it ‘Chill Meet’ or ‘Chill Time’ and play some non-motivational games like ‘Dumb Charades’ or ‘Story around the Circle’, ‘Guess the Object’ etc. That will not only involve everyone but will also be enjoyable for all.”

“Taking turns in a ‘hot seat’ where everyone else grills each character for a set period of time – different profiles have different sets of information with little clues. Each person privately messaged me their first guess. I would then announce a ‘twist’ to suggest something else (dependent on the number of people who guessed correctly to either throw them off or alternatively hint at the correct guess) and then an accusation is made.”

“We do a fragmented karaoke! Someone starts with a line and then we keep it going! It Lifts morale, keeps the brain going and music is always good for the soul! The most recent was ‘February made me shiver’.”

“At our Xmas team meeting, we did origami from a YouTube video (harder than it looked!). We use breakout rooms during bigger team meetings which seem to work well as they give quieter people the opportunity to talk, if they feel uncomfortable talking in bigger groups.”

“We have a Zoom meeting and are able to put our lunch on expenses, and during that time we play Kahoot and Pictionary, Zoom has a whiteboard feature that allows for that! Super fun to see if people are able to draw with their mouse.”

“How about a virtual talent share or concert? Your team could be paired up, for instance, and they decide what they would perform via video. To make it impactful, the performance could be linked to a specific question or problem you pose. It would be fun to see how your team expresses their answers and solutions through song, poetry, drama, you name it! The possibilities are endless… and don’t forget to have a super award or prize for when the winner is voted on.”

If you like the ideas the LinkedIn community has shared for virtual team-building activities, feel free to share what you are doing by leaving a reply in the comments below.

Link to the survey: https://www.surveymonkey.co.uk/r/CK9NFMC